The project started as to aim the growth of the unified brand awareness of the Fuji Television Network.
Applying common graphic design elements and studio sets for the four news programs which has been produced separately with different strategies, also lead to achieve operational efficiency as well as cost containment.

The name of this new unified brand is “PRIME news”.
The primary colours of each program were based on the colour of the sky at the time of broadcasting, with light blue for the day, crimson for the evening, purple for the night sky, and emerald blue for Sunday morning.
The font and display format that was different to each program was also unified. The size of the font was increased so the text is easy to read whilst maintaining a high contrast with its background. On the bottom left of the screen an area named “info dock” was created that permanently displays information such as time, date, day of the week, the weather of the 3 regions and sporting results.
Additional information can also be added by extending the bar like the dock on the computer.
To distinguish at a glance urgent news the display changes from its normal colour of a translucent grey, to a red, signaling a news flash.

Furthermore, the information that was previously positioned in the four corners of the screen was concentrated to the left of the screen. The displayed information moves from left to right, in accordance with the eye movement while reading the text, which minimizes the viewers’ eye movement. Various screens that are used within the programs such as stock price / exchange rates and weather have also been redesigned. Soft hues were used to avoid causing eye strain and designs with increased readability were chosen. In this way, the screen was designed so various information can be easily identified.

The studio sets were designed using bars positioned at various heights, presented in two finishes, natural and dark wood.
When the camera films from the right, the natural hue creates a feeling of intimacy and comfort, and when it is filmed from the left, the dark wood gives a calm and gentle impression.

In addition to this, when the set is filmed from the front, the combination of the two colours will leave a vibrant effect. The scenes can be varied to suit the ambience and target audience of each program by changing the angle of the shots. By changing the height of the floor, different sitting and standing positions were made available, including the traditional style of sitting in front of the desk, to casually sitting on a bench, to making presentations by standing on a high platform.

To display information, a 2000mm square monitor and a 9m “bar” were also prepared.
This has enabled the transmission of information making use of the spatial characteristics of the set,
such as moving the information on the monitor or having the news presenter move while talking.

The lighting for the program set was designed to reflect the individual time frame of each program,
such as the morning sun shining through the trees, or the rich warm colours of the evening.
The opening theme music and 2.5 seconds jingle used right before the TV commercials were composed by music producer Seiji Kameda. Although the basic melody was kept the same, a different arrangement of the melody was used for each program, giving a sense of unity and yet an individuality to each program at the same time.

Unlike the internet where necessary information can be obtained instantly with precision, TV is a media where the viewers obtain information passively.
Therefore, the role partaken by these news programs is not to offer an extraordinary and strong stimulating experience, but more of a source of information that integrates into everyday life, making a rhythm for daily life.
The goal of the design was to achieve a sense of a comforting “matter of course”, resembling freshly baked bread that you will not get tired of eating everyday. 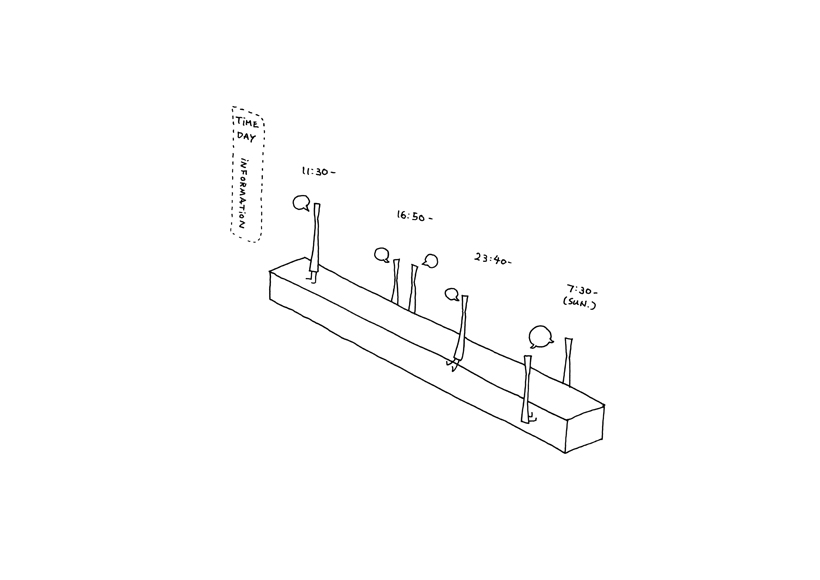