A space installation designed for “ORGATEC”, the largest trade fair for office furniture held biannually in Cologne, Germany.
On the presumption that redefining the square white board, which is a common fixture used in every office, will create an environment that will encourage creativity, the whiteboard was transformed into a circular shape.
This allowed the whiteboard to be rolled around freely in the office, and place against the wall. Moreover, it was hoped that the shape will encourage people to jot down their ideas not in a linear form but chained in a spiral form or spread out in a radial form. Matching desks, benches and high counters were also designed with slits cut into them, allowing the whiteboards to be effortlessly fixed as a divider. The reverse side of the whiteboards were finished off with fabric, serving as a panel with some sound absorbing properties.
This idea was not only applied to furniture but also space. It was considered that whiteboards could be used as “stands” that divides the rooms slotted into a slit in the floor, or used as “doors” for a separate room or a shelf, or several whiteboards were “filed” into the several slits situated in the walls. These various slits could be utilized as bicycle stands, and it could also be envisaged that the bicycles brought to work could also be brought straight to the desk.
The aim was to achieve a dynamic work space that would enhance the “rotation” of the brain coupled with the rolling whiteboard. 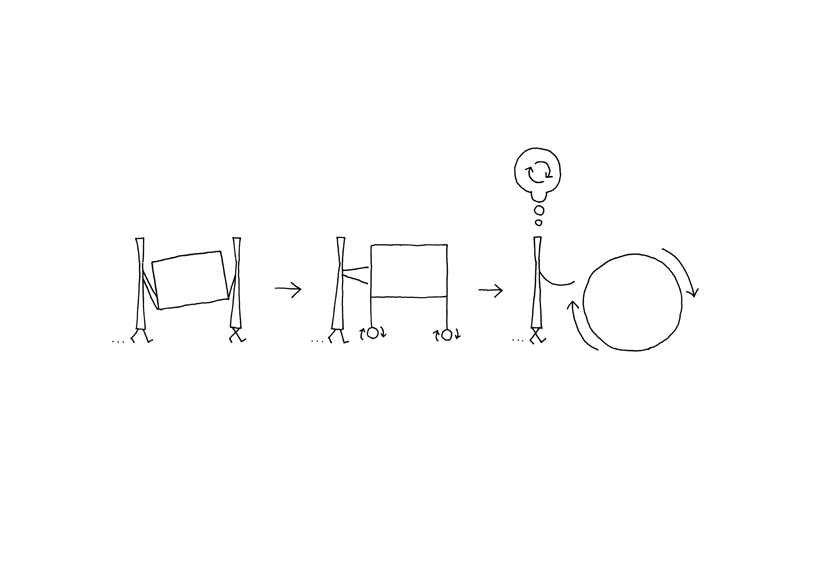