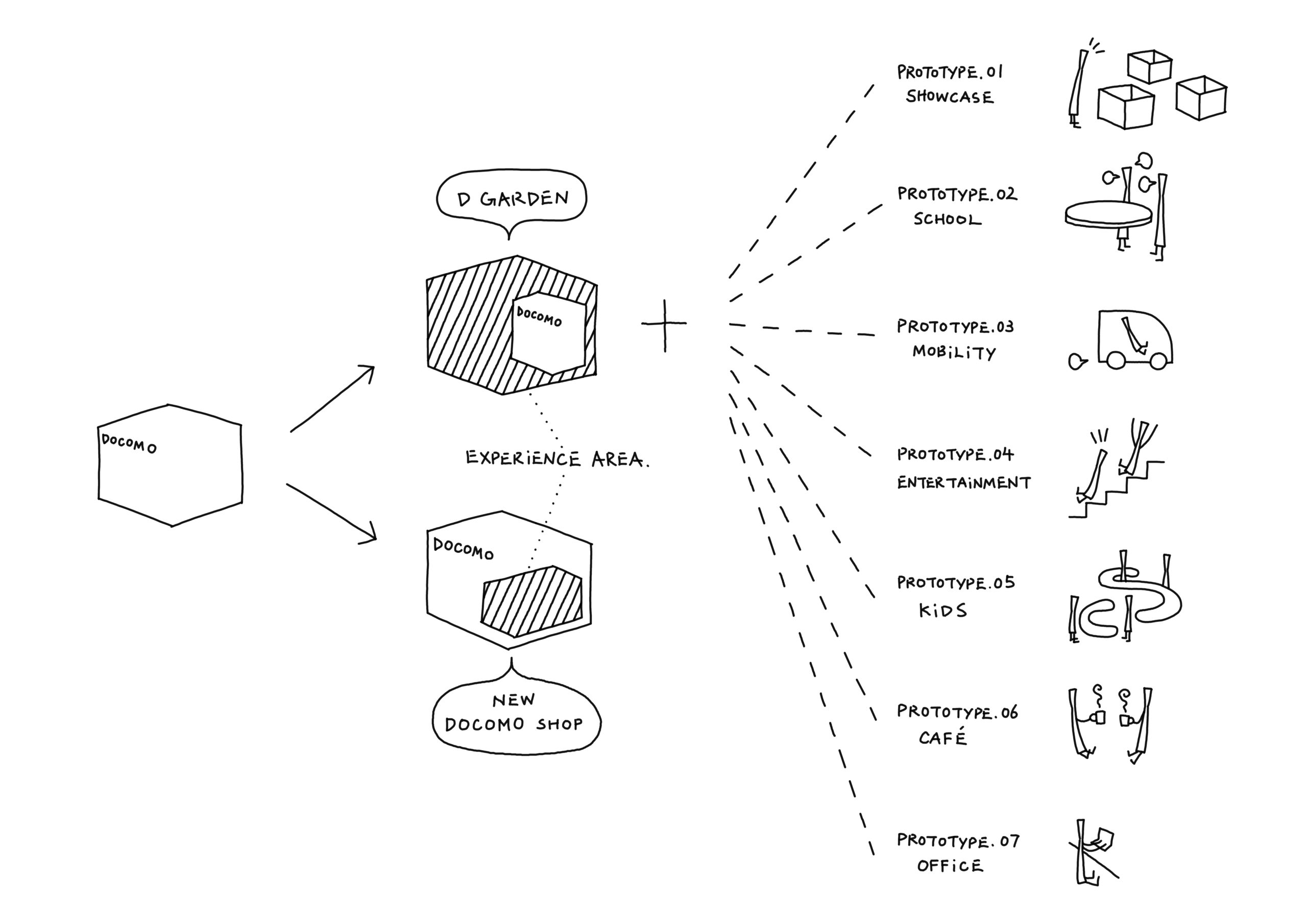 A proof-of-concept for the new designs of docomo shops, the dealerships of NTT docomo, Japan’s largest mobile phone operator.
With the increasing adoption of smartphones, docomo’s business model has shifted from selling smartphones and acquiring new subscribers to figuring out how subscribers can use smartphones they already have, more comfortably and frequently.

In addition to making more procedures available online, docomo shops have introduced a reservation system for customers and have been reviewing the optimal size of device display areas, waiting areas, and counters where customers fill out paperwork.

Accompanying these large-scale changes in service arrangements, were decisions to replace sections in the store with spaces focused on communication and experiences like smartphone workshops, new content trials, and after-sales support. To that end, two new types of storefronts have been developed.

The objective was to complement the new business model by organizing shops according to whether they exclusively serve docomo users, or they open their doors to everyone, including users of other mobile carriers.

The first is the updated docomo shop, which will improve basic functions of the previous storefronts and introduce new communication- and experienced-focused content. To create a calming, tranquil space, the interior is arrayed in dark wood hues and warm grays, the distinctive red of the shop’s previous iteration, and warm lighting.

Meanwhile, “d garden” —the storefront that will welcome a greater number of people not excluding customers of other carriers—nests the functions of docomo shop in a space specializing in communication- and experience-focused content, like a shop within a shop.

Because the shop does not limit entry to docomo users and instead encourages anyone in want of assistance with smartphones to swing by, “docomo” was removed from the shop name, leaving only “d.” Its objective not being to sell products, the word “shop” was replaced with “garden,” in the image of parks and other such places open to anyone.

Green was used in graphical elements to complement the red and evoke the image of a park.
Natural wood and four soft colors were combined and a lighting plan mimicking natural light was adopted to create a bright, dynamic space.

Posters and other POP displays have gone digital, reducing visual noise in the shop and eliminating the hassle of swapping displays.

As for the style of customer service, the use of tablets makes various approaches to communication possible, not only at conventional service counters but also in lounges and café environments.

Comforts and functionality have improved for employees as well, with regard to the back of the house and their lockers, break areas, and storage areas.
To accommodate the considerable waves of activity and inactivity that shops experience, a hybrid space was prepared, to be used flexibly as
a private consultation space or staff workspace. Efficiency was improved within a limited space.

Graphic assets and patterns used in the interiors of both shops employ motifs developed from each letter in “docomo.” It was decided that this shared pattern, though with color variation, would give the sense of a unified docomo brand.

The former uniforms were replaced with casual and relaxed outfits intended to put customers at ease. Uniforms once lent only to women have been made androgynous with a variety of items such as T-shirt, cardigan, maternity, and pants style, not just the jacket style, so that men and women can freely coordinate different pieces. Materials were selected not only for being highly elastic and easy to move in, but also for maintainability, like being less prone to wrinkling and quicker to dry, making it easier for employees to work. Further, the change from pumps to sneakers is intended to reduce foot fatigue.

In developing this new design project, the team conducted design verification at prototype shops built based on various hypotheses.

dg-prototype 01
At a large downtown storefront, pony walls surround each section without blockinglines of sight within the shop and compartmentalize space as appropriate.
A 5G experience corner, smart home appliance trials, a pop-up corner, smartphone workshops, and a bike sharing system were implemented and their possibilities verified.

Though still distinguishing between d garden and docomo shop area, the installation of a service counter between them—doubling as a café counter—has enabled staff to multi-task, and has also reduced the psychological barrier presented by staff standing vigilantly by the entrance.

dg-prototype 02
In a large roadside storefront, eight round tables were installed, each 900 mm high.
The shop’s focus was placed on various educational workshops and seminars, such as smartphone classes.

With round tables, staff and visitors can stop by and talk to one another more easily, and during workshops with high turnout, people gather around the tables and give rise to a sense of unity and festivity. Additionally, elevating the floor in one area secures space for children’s workshops at the same eye level as the adults sitting nearby.

dg-prototype 03
A mid-size roadside storefront offers new services related to mobility, like car washing.
The interior is designed to also serve as a garage for the electric vehicles used for house calls.

dg-prototype 04
The multi-story storefront is a two-story proof-of-concept wherein the area for docomo users is on the second floor, prepared for visitors with an explicit purpose, and completely discrete from the wide-open d garden on the first floor.
The downstairs employs distinctive bleachers, where visitors can experience engaging in live performances and watch sports and games through 5G and AR technology.

dg-prototype 05
A store in a shopping mall provides a place for three generations of family to spend time together, with an emphasis on kids.
Through the use of curved tables and benches, the space is composed to let parents relax while watching over their children from nearby.

The design does not overly separate each section and instead upholds an organic connection between them.
The effects of not distinguishing between the d garden area and the docomo shop area were verified.

dg-prototype 06
A large roadside storefront was partnered with a local coffee shop to focus on communication through an actual dining experience. To be friendly to families, the design includes a dog park and a kids’ corner.

In the place of carpet or PVC tiles verified thus far, PVC tiles printed with a woodgrain pattern were installed and analyzed for their visual effect and maintainability.

dg-prototype 07
A storefront inside a train station building serves as a simulation of shops to be located in high-traffic train stations.
While other proof-of-concept shops situate the d garden area up front near the store entrance, the d garden here is in the back, designed with coworking functions and equipped with desks, personal booths, and a meeting room. The effects of providing assets for repeated use were verified. 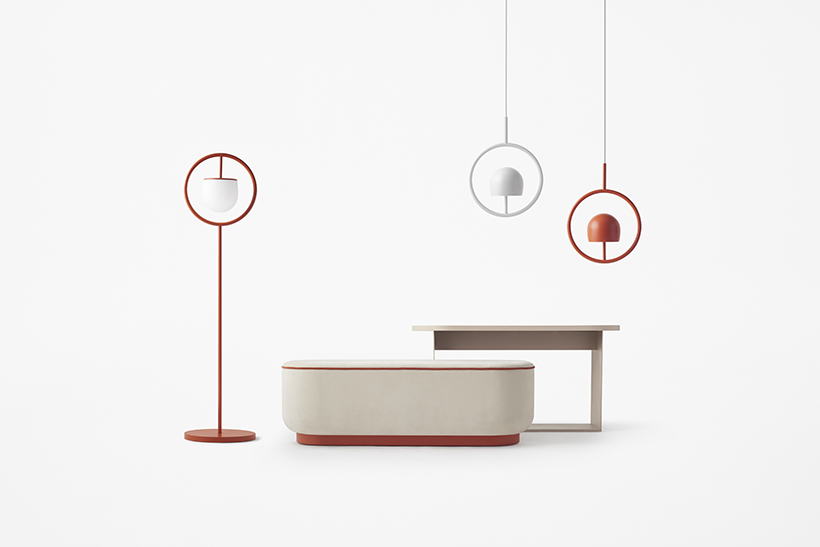